Former two-division UFC champion BJ Penn will return to the octagon on December 29 to battle Ryan Hall in a lightweight contest at UFC 232.

“The Prodigy” has returned to his roots for this fight, training under his original jiu-jitsu coach Andre Pederneiras at Brazil’s famous Nova Uniao gym.

“I’m just in the process of finalizing a new four-fight contract with the UFC,”said Penn.“Everything is going good. I am down here in Brazil. Andre Pederneiras is running the camp. Leo Santos is doing the jiu-jitsu, and Johnny Eduardo is helping me with my striking.”

Taylor asked BJ if he has been training with the likes of former UFC champions Jose Aldo and Renan Barao, who are staples at the Nova Uniao gym.

“Yea Aldo and Barao are both around helping. There is just so many young tough guys here, it is honestly unreal.”

While BJ Penn has been busy training with the young lions of Nova Uniao, he has also found the time to watch some tape on his UFC 232 opponent Ryan Hall.

“I recently watched the Gray Maynard fight. I hear that he (Hall) is doing a lot of stand-up in preparation for our fight. But I have my own gameplan and I am ready to execute.” 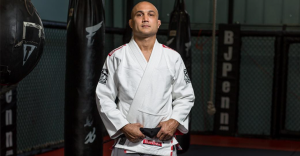 Ryan Hall is thought by many to have an awkward style in terms of fighting. However, BJ Penn does not share that same sentiment.

“I think people call Ryan Hall an awkward fighter because he goes upside down and does all the jiu-jitsu stuff and people are sort of afraid because they don’t understand what is going on. But, to me it doesn’t look awkward. It’s just a guy trying to do jiu-jitsu on the ground and I’m ready for that of course.”

Despite having lost his past five fights in a row, BJ Penn is rejuvenated and full of confidence heading into the 31st fight of his illustrious career.

“I’m in a good place right now. I’m out here training and I’m focused. I have my life straight and I am ready to go man. The last time I came down here (to Brazil) and trained for something, I became the first foreigner to win the Brazilian Jiu-Jitsu World Championships. I love it down here. Andre (Pederneiras) is like a father to me. All of the training he is having me do, it has me feeling like I could go win another championship.”

BJ Penn was asked if he finds any extra motivation in going up against Georges St-Pierre’s head coach Firas Zahabi, who will be cornering Ryan Hall at UFC 232.

“I will always remember that Firas (Zahabi) is in my opponents corner. But like you said, we’ve met Firas behind the scenes and it is nothing but respect. Firas is very good. He is like the Canadian Greg Jackson,” BJ said with a laugh. “He’s that guy. He is constantly thinking and trying to beat you with his mind. He is constantly trying to make the fight as easy as possible for his fighter. So I know he will have Ryan Hall very prepared. But you know, the game doesn’t change. I’m still coming in there to beat his ass!”