He hasn’t been inside the ONE Championship cage for almost two years, but Brandon Vera insists he is faster and stronger than ever as he bids to defend his ONE Heavyweight World Title against Cage Warriors champion Mauro Cerilli at ONE: Conquest of Champions this Friday, November 23 in Manila, The Philippines.

“Everybody’s worried that it’s been nearly two years, but it doesn’t feel like that to me,” the Filipino-American Brandon Vera said. “I’ve been doing action stuff, and I’ve been training on my days off. I’ve really been just working.

“I’ve been away for a while, almost two years, but I don’t think for a second that I haven’t been training and keeping sharp.

“I’m stronger, faster, smarter, and better now than ever before. My team has made sure that I will be at my best by the time I step back into the ONE Cage.

“This is home for me. I really missed this and I am excited to perform in front of you all next Friday night. The belt is going to stay in the Philippines.”

Having last competed at ONE: Age of Domination in December, 2016 when he secured a first-round knockout of the previously undefeated Hideki “Shrek” Sekine, Brandon Vera admitted he was chomping at the bit to return.

“Excited is not even the word because I’m longing for it,” he said. 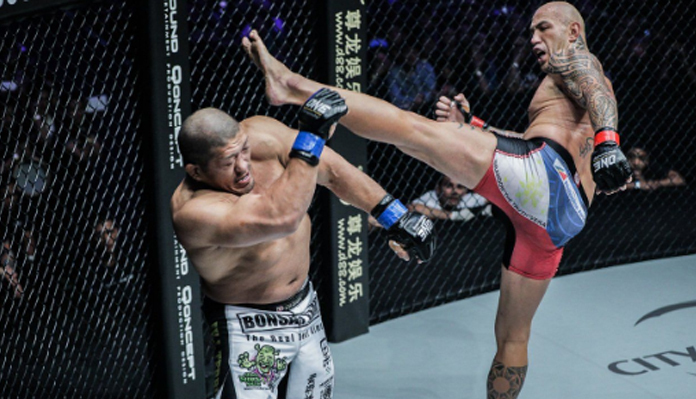 “The only thing I can imagine it to be is the opposite of being locked up. Like if you’re locked up, you’re excited, and you cannot wait for the outside. I’m the opposite. I can’t wait for the inside [of the cage]. I know, it sounds crazy, right? That’s all the emotional stuff, that’s all the anxiousness, all the excitement, the nervousness – all of it is encompassed in that feeling, I guess. I can’t wait to get back inside,” he added.

Vera’s return won’t be a walk in the park, though. Cerilli boasts a 12-2 professional record and is riding a five-match winning streak. A known finisher, nine of “The Hammer’s” 12 wins have come by either knockout or submission.

But Brandon Vera is confident he will pick up where he left off.

“I am excited to prove that I am one of the best heavyweights in the world on November 23,” Vera said.

“I don’t do promo stuff. Just watch the fight and enjoy because I don’t win by points. It’s not my style. I will be going for the finish.”

Catch Brandon Vera and Mauro Cerilli’s fight on the ONE Super App this Friday night in Asia, and Friday morning in North America.