ONE Women’s Atomweight World Champion “Unstoppable” Angela Lee makes her return to competition on 12 July in Kuala Lumpur, Malaysia in the co-main event of ONE: MAsters of Destiny.

The card is shaping up to be an impressive one with Lee’s bout playing second fiddle only to the rematch between Giorgio Petrosyan and Petchmorakot Petchyindee Academy.

Angela Lee believes her destiny is to become the ONE Women’s Strawweight World Champion, but that dream was deferred in March when she suffered the first loss of her professional career.

After performing well in the first four rounds, and nearly submitting champion Xiong Jing Nan in the penultimate frame, Lee was gassed heading into the last round. The dominant Chinese champion showed resilience and great stamina as she mustered up the strength to pull off one of the biggest comeback wins this year. Xiong scored the fifth-round TKO finish over Lee, and now the latter has some work to do in the division.

Lee’s next bout will be against Michelle Nicolini. The match is a must-win for Lee. For several reasons, she might be set to face more pressure in this bout than she has in her career. 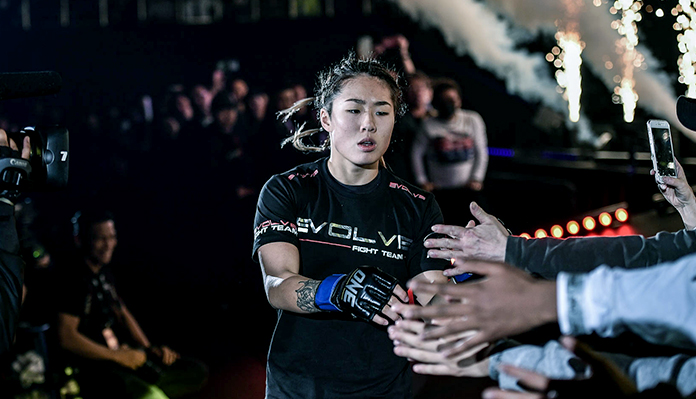 Lee’s younger brother Christian has spent much of his career trying to keep pace with his sister’s accomplishments. She won a world title in her sixth professional bout and quickly became one of the biggest stars in Asia.

Things didn’t progress as promptly for Christian, though he has now hit his stride. In May, at ONE: Enter the Dragon, he pulled off an upset win over Shinya Aoki to become the new ONE Lightweight World Champion.

For the first time ever, it is Angela looking to rebound from a loss while Christian is coming off a win. The siblings are very close, but you can bet Angela wants to win just as Christian did in his last bout.

Overall, Lee is not accustomed to losing, despite the results of her brother’s matches.

When an athlete — especially a martial artist — has never tasted defeat, it is difficult to gauge how well they will respond to the adversity. When the loss comes by way of KO or TKO, things can be even more complicated.

To Lee’s credit, she has said the defeat to Xiong “fired her up,” and she is eager to take on Nicolini to get herself back on track. Winning the match is even more critical for Lee because it’s her second straight bout at strawweight. She is still the reigning ONE Women’s Atomweight World Champion, but she may never compete at that weight again. 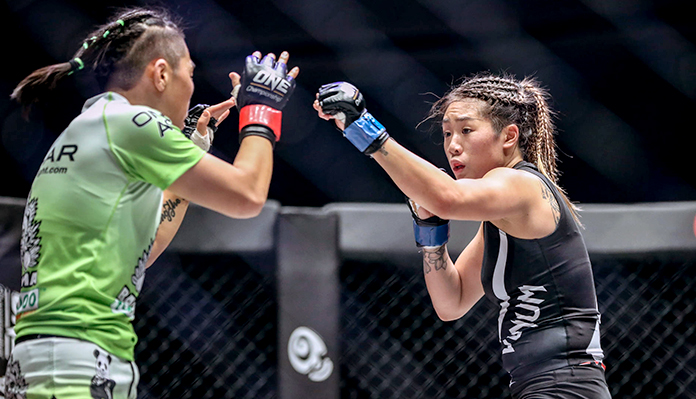 Lee began her career very early, and as she physically matured, it was going to be harder to make 105 pounds. Strawweight is a much more natural division for Lee at this stage of her career. Because of this, she can ill afford to fall to 0-2 in what could be her permanent division.

If she cannot notch a win at strawweight, there will be questions as to whether she can be as dominant as she was at atomweight. A big win over Nicolini would likely erase those doubts and establish Lee as a legitimate strawweight.

Ultimately, Angela Lee wants another crack at Xiong. She was so close to making history by becoming the first woman to hold championships in two different divisions simultaneously. If she had just a little more in the gas tank or had been more cautious with her energy output, Lee would have defeated Xiong by decision.

A case could have been made for Lee to get an immediate rematch, but there was no controversy. Xiong proved to be the better woman on that night. 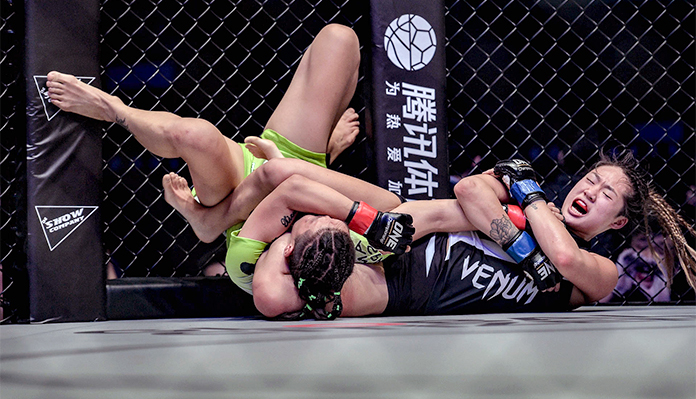 As it stands, Lee must restore her self-confidence as it pertains to overcoming a talented strawweight like Nicolini, and Lee also has to prove she is worthy of another title shot. Scoring a victory over Nicolini should position her to climb back into the circle with Xiong perhaps before the year is over.

More than anything else, Lee has to win this match against Nicolini because she’s a better overall mixed martial artist. Lee is 15 years younger than the Brazilian, but she’s had more professional mixed martial arts experience.

Lee holds a 9-1 record, which is superior to Nicolini’s 5-2 mark. Nicolini is an excellent Brazilian Jiu-Jitsu practitioner, but she’s coming off a loss in her last bout against Tiffany Teo in November 2018.

Angela Lee should enjoy a decided advantage in striking, and her grappling is excellent, so she shouldn’t be overmatched even if the battle goes to the ground. To put it plainly, if Lee cannot defeat Nicolini, she will find herself at an unpleasant crossroads in her career.