The rivalry between UFC standouts Nate Diaz and Dustin Poirier continues to escalate as the pair once again traded shots on social media.

Ever since ‘The Diamond’ defeated Conor McGregor in their highly anticipated rematch at UFC 257, the Louisiana native has been referring to himself as “uncrowned”.

Despite Dana White recently confirming that Khabib Nurmagomedov is still the promotions lightweight world champion, Dustin Poirier believes his recent victory over the Irishman has him at the top of the promotions 155lbs ranks.

That notion obviously does not sit well with former UFC lightweight title challenger Nate Diaz. ‘The Stockton Slugger’ addressed Poirier in a recent Instagram post where he dubbed himself as “The Real Uncrowned King“.

“Don’t forget who started this G shit. The real uncrowned King. No rematches ever given. Dustin you do what your told by your daddy’s u lil bitch 👊🏼.” – Diaz captioned the photo. 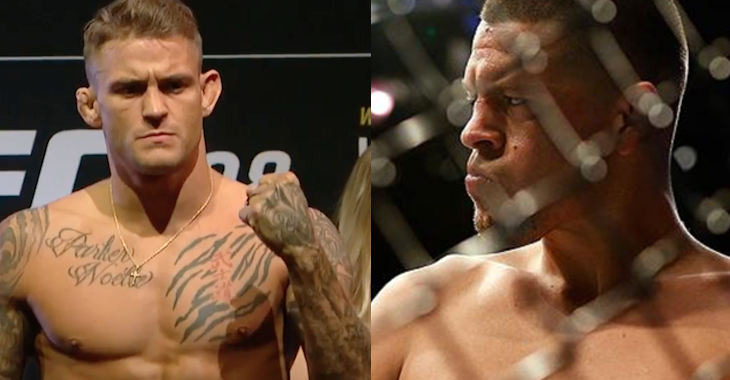 “You lost the rematch Nathan. 1 was given lol.” Poirier replied sarcastically.

Nate Diaz then responded with the following words of war.

“Dustin Poirier you hurt your pussy trying to fight me, so why you talking?” – Diaz replied.

Nate Diaz and Dustin Poirier were initially slated to collide in a lightweight contest in November of 2018 at UFC 230. Unfortunately for fight fans, ‘The Diamond’ suffered an injury and was unable to compete.

Diaz (20-12 MMA) has not competed since suffering a TKO loss to Jorge Masvidal in his bid for the promotions BMF title at UFC 244 in November of 2019. That setback was preceded by a unanimous decision victory over former lightweight title holder Anthony Pettis at UFC 241.

Would you like to see a bout between Nate Diaz and Dustin Poirier booked next by UFC officials? Share your thoughts in the comments section PENN Nation!