UFC welterweight champion Kamaru Usman has revealed his required stipulations for a potential move up to middleweight.

Following his impressive victory over ‘Durinho’, Kamaru Usman received some high praise from Dana White. The UFC President suggested ‘The Nigerian Nightmare’ was on his was to surpassing Georges St-Pierre as the greatest welterweight of all time.

With that being said, many fans and analysts have been recently debating who should come next for the promotions reigning welterweight kingpin. Some individuals have suggested that Kamaru Usman would make a perfect return fight for undefeated lightweight champion Khabib Nurmagomedov. 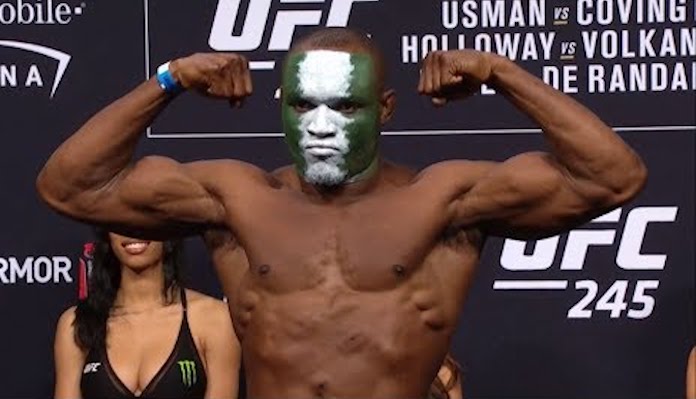 Meanwhile, others have suggested that Usman should make a move up to the UFC’s middleweight division. ‘The Nigerian Nightmare’ was asked about the possibility of making the jump up to 185lbs in a recent interview with ESPN.

“Absolutely,” Usman said when asked if he would move up to middleweight if his friend and current champ Israel Adesanya left the division. “If Izzy is willing to move up. Well, he is moving up. But, if he’s willing to give up that 185 belt and say ‘I don’t want to have anything to do with that division anymore’ then absolutely. I would absolutely entertain that thought.”

“But, on no account right now would I ever entertain going up to fight with Izzy. That’s just not something that I am interested in. I’ve stated it over and over and over before. I’d rather there be two African’s with belts as opposed to just one African with two belts. And you know, after March (Ngannou vs. Miocic 2) there’s going to be three Africans with a total of four belts.”

Kamaru Usman is currently in talks to rematch Jorge Masvidal in his next Octagon appearance.