The highly anticipated featherweight main event has high stakes as UFC President Dana White recently announced that the winner of tonight’s Zombie vs. Ortega fight will receive the next shot at current featherweight champ Alex Volkanovski.

Chan Sung Jung (16-5 MMA), aka The Korean Zombie, was most recently seen in action at December’s UFC event in his homeland of South Korea. That evening in Busan, ‘TKZ’ recorded his second straight TKO victory, stopping former lightweight champion Frankie Edgar in the very first round.

Meanwhile, Brian Ortega (14-1 MMA) will be competing for the first time since suffering an ugly TKO loss to Max Holloway at UFC 231. That setback served as the first of Ortega’s career. Prior to the loss ‘T-City’ had gone a perfect 6-0 under the UFC banner. 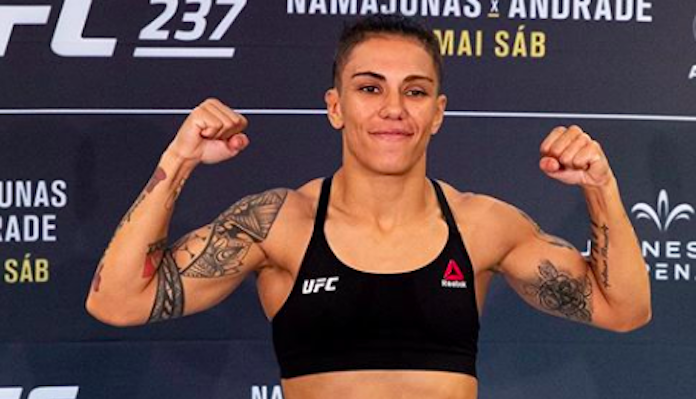 After losing her title to Weili Zhang and then suffering a decision defeat to Rose Namajunas, Jessica Andrade has decided her future lies at 125lbs.

The Brazilian had won 7 of her past eight fights prior to those two most recent setbacks, so it will be interesting to see if she can rebound in the promotions flyweight division.

Meanwhile, Katlyn Chookagian will enter tonight’s UFC Fight Island 6 co-main event looking to build off the impressive decision victory she earned over Antonina Shevchenko this past May. That victory was preceded by a TKO loss to Antonina’s sister Valentina at UFC 247, in a bout that served as Chookagian’s first career UFC title opportunity.

Crute (11-1 MMA) was most recently seen in action at February’s UFC event in Auckland, where he scored a submission victory over Michał Oleksiejczuk. Prior to that, ‘The Brute‘ was coming off the first loss of his career against Canadian standout Misha Cirkunov.

Meanwhile, Bukauskas (11-2 MMA) will enter tonight’s event on a seven-fight win streak, his latest being a TKO victory over Andreas Michaelidis in his Octagon debut.

Get all of tonight’s UFC Fight Island 6: ‘Zombie vs. Ortega’ Live Results and Highlights below:

Jim Crute vs. Modestas Bukauskas – Crute def. Bukauskas via KO in Round 1

Gadzhimurad Antigulov vs. Maxim Grishin – Grishin def. Antigulov via TKO at 4:57 of Round 2

Who are you picking to win tonight’s UFC Fight Island 6 main event between The Korean Zombie and Brian Ortega? Share your predictions in the comments section PENN Nation!

This article first appeared on BJPENN.com on October 17, 2020

In the main event of UFC Vegas 51, a welterweight rematch between Vicente Luque and Belal Muhammad headlines the card. Heading into the fight,...

Aljamain Sterling still doesn't understand why he was such a big underdog against Petr Yan. Sterling was looking to defend his belt in the co-main...

BJPENN.COM is your premier source for all MMA News. We serve you with the latest breaking news, exclusive fighter interviews, videos and more. It is also the home of 2X UFC Hall of Fame Champion. BJ "The Prodigy" Penn. After a decade of on-line operation BJP has evolved into the most reliable destination for all of your MMA needs.